Search for anything on our site.
Please select your language in the dropdown menu below
QUICK MESSAGE

About Dominica
Dominica is an English speaking VOLCANIC ISLAND IN THE Eastern Caribbean having an area of 298 square miles. Dominica is situated between Guadeloupe and Martinique in the Windward Islands of the Lesser Antilles.Forests cover more than 60% of the island, which has 365 rivers of which only the Layou and Indian Rivers are navigable.
IN THIS
SECTION
?
Click on the buttons above to view a specific section. Double click on the button to return to the initial view

Dominica is an English speaking VOLCANIC ISLAND IN THE Eastern Caribbean having an area of 298 square miles. Dominica is situated between Guadeloupe and Martinique in the Windward Islands of the Lesser Antilles.

Forests cover more than 60% of the island, which has 365 rivers of which only the Layou and Indian Rivers are navigable. Annual rainfall ranges from 47 inches on the eastern coast to 400 inches in the rain forests in the center of the island. Hot springs and a boiling lake have a potential for being developed into geo-thermal energy 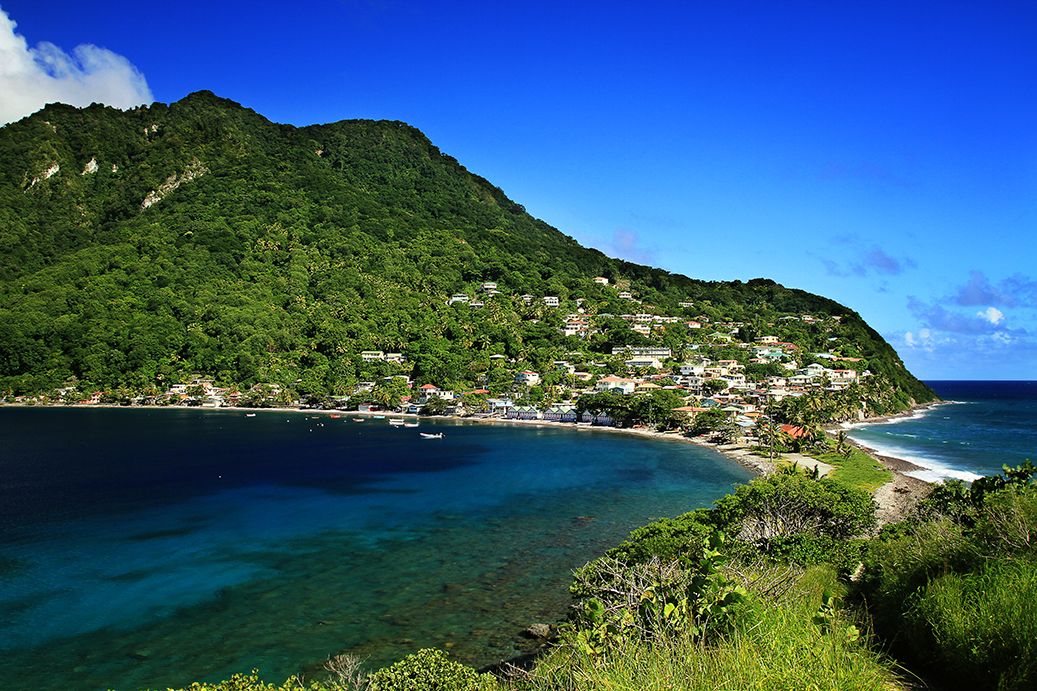 Roseau, overlooking Woodbridge Bay on the southwestern coast, is the capital and chief port. It has a forty-foot draught and can handle 20 to 40 foot containers serviced by roll on/roll off facilities. Cruise ships dock here on the Ferry Terminal in the Capital City of Roseau and at Portsmouth in the northwest on the Fort Rupert Bay. 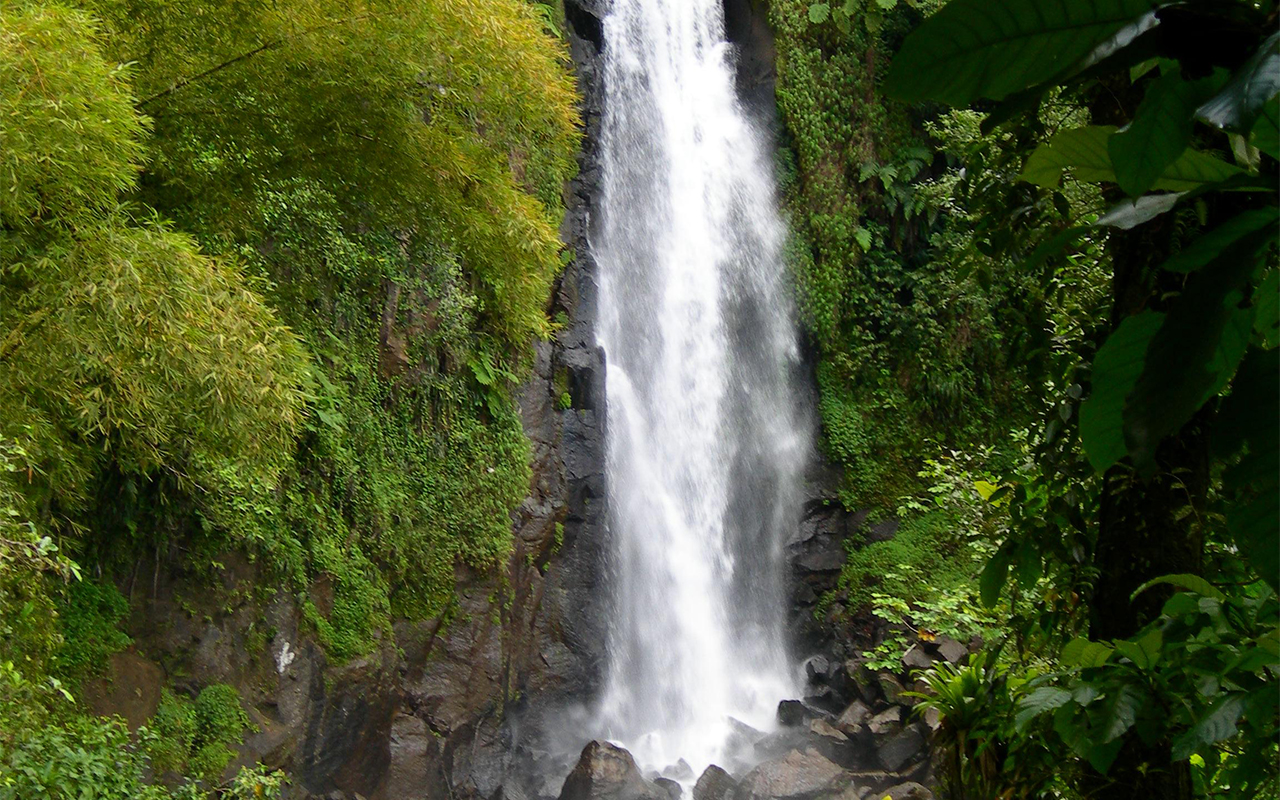 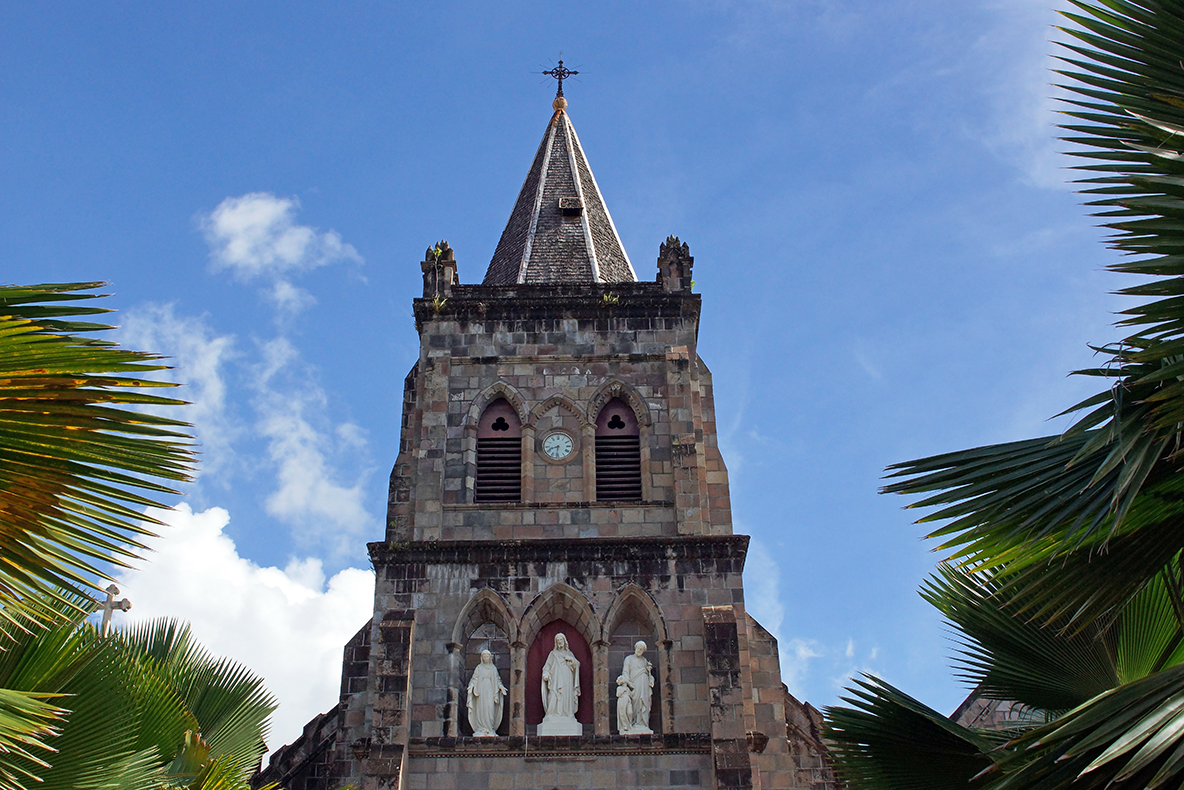 From Europe, passengers can use British Airways, Virgin Atlantic and Lufthansa to fly to Antigua or Air France to Martinique and Guadeloupe for connecting flights to Dominica or travel by sea for two hours on the Ferry seeing the beauty of the luscious green Dominica as you enter its Capital City of Roseau. 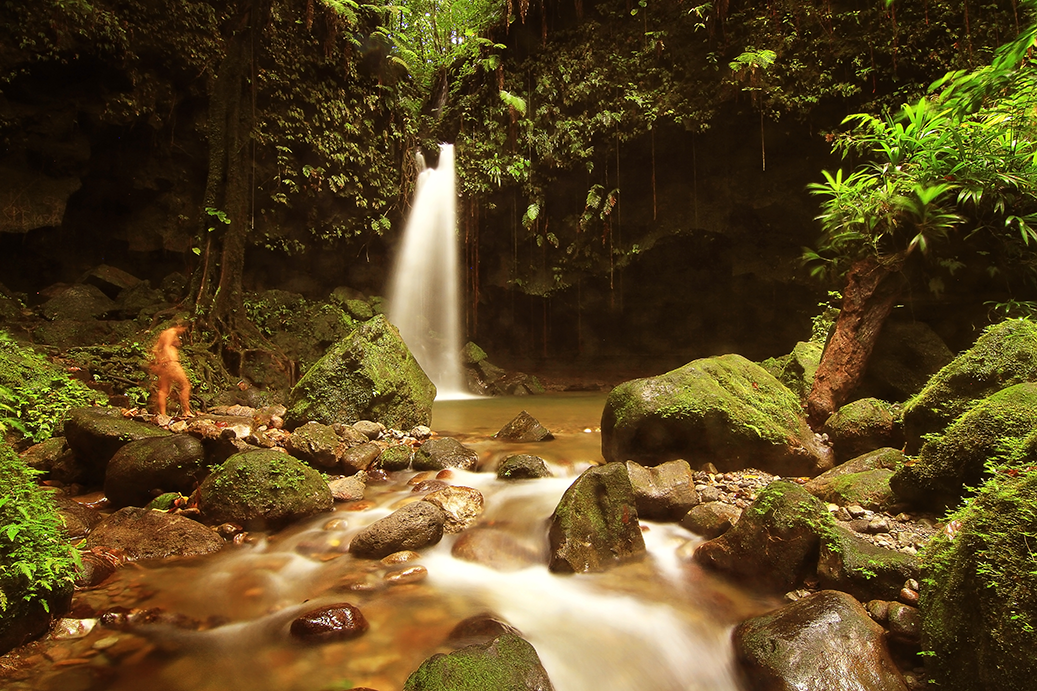 Larger aircrafts arriving from other countries land at Marigot, the third largest settlement on the northeastern coast where the now night landing Melville Hall Airport has a 4,800 foot runway. Smaller planes use Canefield Airport outside of Roseau.

Dominica is one of nine members of the Eastern Caribbean Central Bank (ECCB). Its conservative policy of building exchange cover for the Eastern Caribbean dollar to a much greater extent than required by its basic Agreement has led to monetary stability for member countries and made the EC dollar one of the strongest currencies in the region and the world.

Under the 1996 International Business Companies Act amended in March of 1997, An International Business Company (IBC) or more particularly known as an Offshore Company is defined as a company that does not: (1) accept banking deposits and insurance contracts; (2) engage in trust business; (3) own property in Dominica except for an office used to communicate with members; (4) maintain books; and (5) carry on business in Dominica with persons domiciled or resident in Dominica. Every IBC must be formed with liability limited by share capital.

Although an IBC domiciled in Dominica is forbidden to engage in business with Dominica residents, it is permitted to:

Every company must maintain a representative office in Dominica and appoint an approved authorized agent and alternate authorized agent. Land can be leased or purchased for office space. The company must maintain either $500,000 in permanent capital or 5% deposit liabilities unless another percentage is fixed by the Minister for Finance. Liquidity is regarded as adequate if it amounts to at least 12% of total assets or another amount if determined by the Minister and consists of cash or marketable securities including Treasury Bills or other convertible or time deposits having less than 12 months maturity in a local or an acceptable international bank.

To obtain a license, offshore investors submit to the Registrar a Memorandum of Association and Articles of Association. The memorandum must include the company’s name, address of its registered office and registered agent, its objects or purposes, the currency in which shares will be issued and detailed information about the shares. The company name must include the words “Limited”, “Corporation”, “Incorporated”, “Sociedad Anonima”, or their abbreviations. Names can be reserved for 90 days upon payment of the requisite fees.

Shareholders can be individuals or corporations. No distinction is made in the law between private and public companies and there are no regulations for prospectus. Shares must be fully paid in and can be issued in any currency, be paid for in kind and be either par or no par. Dominica permits a wide variety of shares, including registered, bearer, common, preferred, redeemable, Treasury, fractional, voting, non-voting, limited voting and have limited participation in assets.

An unusual feature of Dominica’s banking structure is that an applicant may obtain both an onshore and offshore license but must operate and report on them separately.

In addition, generally an offshore bank ought not to provide financing for local operations, however, the bank can provide loan financing to local entrepreneurs for earmarked projects approved on a case-by-case basis with the Ministry of Finance, Industry and Planning, otherwise its financing are geared for external projects.

Under the Offshore Banking Act of 1996 amended in 1997, offshore licensees are limited to conducting banking business exclusively in currencies other than East Caribbean Dollars. Licensees are exempt from all taxes and duties connected with their offshore banking business in Dominica. Trust companies formed under the act are exempt from Dominican taxation on offshore trust business carried on from within Dominica.

Transfer of Funds and Guarantees

Funds may be repatriated, generally up to the percentage of the foreign participation in the company. Repatriation of profits is permitted provided that all local tax liabilities have been settled.

Foreign exchange bank accounts are allowed. Foreign nationals who retire in Dominica are exempt from Dominican taxation on income earned abroad. Foreigners are entitled to purchase a certain amount of land without the need of having to apply for a License to do so.

The Government of Dominica guarantees free convertibility of exchange. However, Dominica does not have a bilateral treaty with the United States providing investment guarantees against nationalization or expropriation, war, revolution or unrest and inconvertibility of exchange through the Overseas Private Investment Corporation of the United States.

Directors can transfer any of the IBC’s or offshore company’s assets in trust to one or more trustees, another company, an unincorporated association, a partnership or foundation. In making the transfer, directors may provide that the company may be beneficiaries, members, certificate holders or partners of any other similar interest.

Annual members’ meetings are not required by law and participation can be by telephone or other electronic means or by written consent. Directors are obliged to convene a meeting if they receive a written request from members holding more than 50% of outstanding voting shares. Proxy votes are allowed. All shares vote as one class and each whole share has one vote. A quorum consists of one-third of shareholders owning voting rights. Share registers can be examined only by registered shareholders or under Court Order.

Only one director is needed and this director can be a corporation. Meetings can be held inside or outside Dominica and participation can be by telephone or other electronic means. Resolutions can also be passed in writing or by electronic means. Directors can appoint a person to be a company officer or agent

At its Roseau office, the company must keep a register of shareholders that legally may not include trusts; minutes of members’, directors’ and committee meetings; and resolutions; and accounts and records reflecting the company’s financial position. It is not necessary to be audited or file financial accounts with the Government Financial Services Authority.

No Director or Shareholder’s name is publicly available. Such information are kept by your registered agent under seal and cannot be divulged to anyone by a mere request. Only the Court can order the divulgence of the information and it is not easily granted. You must show cogent and compelling reasons to the Court for it to so order.

A company incorporated under the Companies Act or under the laws of another jurisdiction can arrange to be continued as an IBC by presenting either Articles of Continuation written in English or accompanied by a certified translation if written in another language. The Articles must be approved by a majority of directors or other authorities in charge of the company.

Dominica has two airports: Douglas-Charles (DOM) and Canefield (DCF) Airports. Douglas-Charles was originally known as Melville Hall airport and is the bigger of the two. Most visitors to Dominica will arrive through this airport which accommodates commercial airlines.

Canefield Airport, located 15 minutes from the Capital City of Roseau, is only 3,100 ft long and is suitable for chartered flights and private jets. Douglas Charles which is located in the north-eastern side of the island is approximately one hour drive from the Capital. International flights from the US and Europe are connected to the island through hubs in Antigua (ANU), Barbados (BGI), St. Maarten (SXM), Puerto Rico (SJU), Guadeloupe (PTP), and Martinique (FDF).

Every year, hundreds of thousands of visitors arrive on the island from cruise ships berthed at Woodbridge Bay, Roseau Cruise Ship Berth, and Cabrits Cruise Ship Berth. Captains of yachts and sailboats can also anchor their private yacht at any of the island’s official ports, but is required to check in with customs and immigration on arrival.

Air service to Dominica from North America and Canada is provided by American Airlines, Jet Blue, Delta, Air Canada, and a host of other airlines through the hubs of Puerto Rico, Barbados and Antigua, with connecting flights on Sea Borne, Winn Air or LIAT to Dominica’s Douglas-Charles Airport. 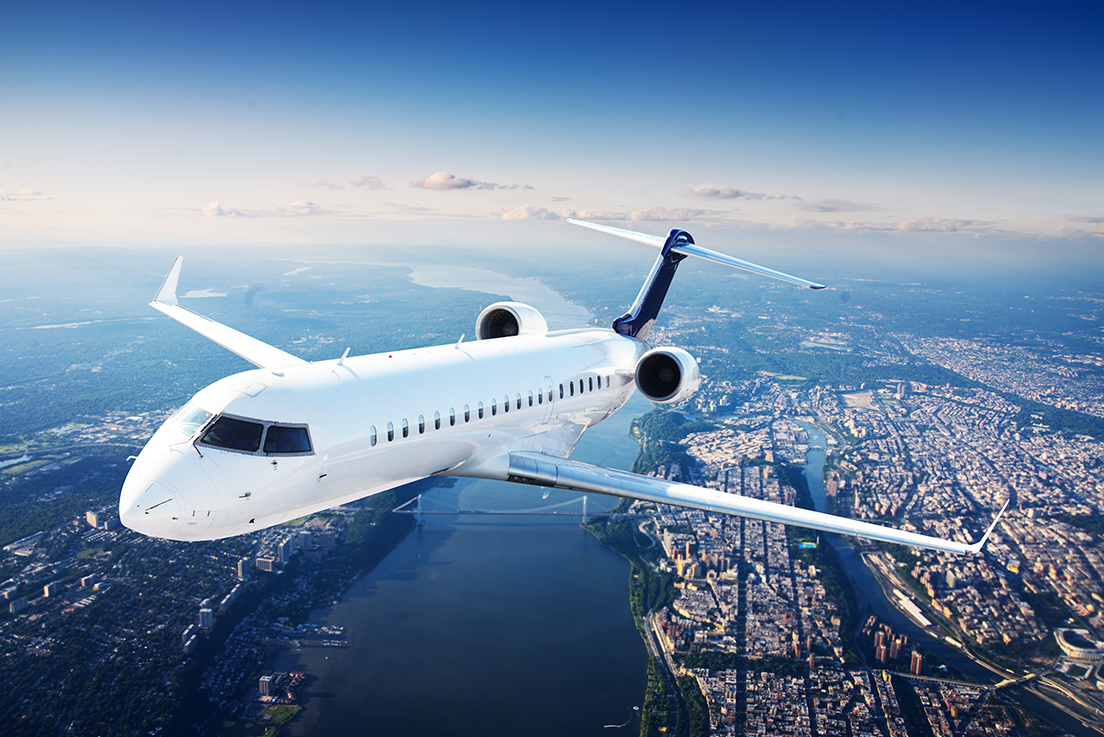 From Europe, tourists travel British Airways, Virgin Atlantic, KLM Airlines, Lufthansa and others to Antigua, St. Maarten or Barbados and then connect on LIAT Airlines to Dominica.

Tourists also take Air France to neighbouring French islands of Martinique and Guadeloupe for connecting with LIAT flights from Point-a-Pitre and Fort De France to Dominica or travel by sea for two hours on the Ferry, l’Express d’Esiles, seeing the beauty of the luscious green Dominica as you enter its Capital City of Roseau.

For more information about Dominica, please do not hesitate to contact us.